Visits from British partygoers and other tourists were an early casualty of the coronavirus pandemic for the Slovak capital Bratislava – and now it is struggling to claw back its depleted industry.

Slovakia was praised for its swift and decisive response to the virus – which included shutting its borders to tourists – but it has come at a price.

Speedboat captain Frantisek Fabian set his cap at a jaunty angle and reached for the throttle.”You might want to hold on,” he said, and we duly complied.

Our captain – who preferred to be called Frank – was courteous but firm.

The boat’s engine roared into life, gouging a deep furrow in the murky green waters of the Danube. We flew past barges making their way towards Hungary, disturbing flocks of river birds and doing what I can only describe as handbrake turns in front of startled fishermen.

“We’ve recorded a significant drop in demand this year,” said Frank, after depositing us at our destination. The Danubiana Museum of Contemporary Art is perched on an island about 15km (9 miles) downstream from the city centre. 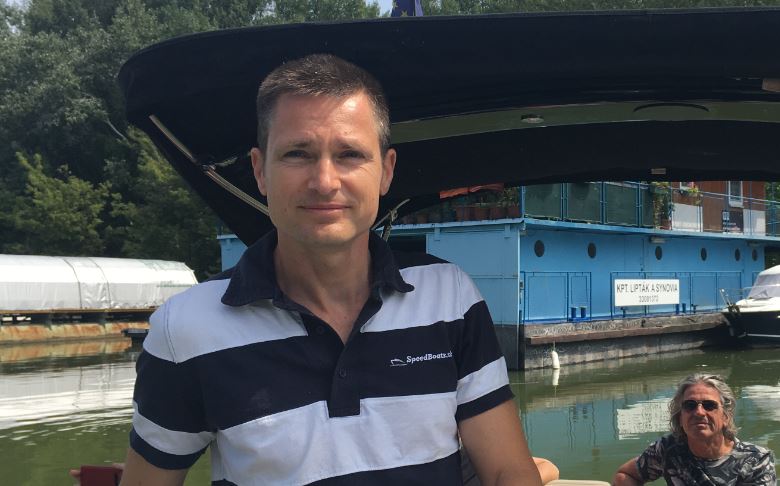 Things have to start getting back to normal next year, otherwise we’ll be facing major difficulties

The speedboats are just one part of a wider tour operator business which, according to Frank, has only been able to survive thanks to state aid and cuts to investment, marketing and salaries. Frank’s company also offers high-end seven-hour voyages to Vienna.

‘Every tourist was important – now we have none’

At the Danubiana, small groups of mainly Slovak visitors gazed at the artworks as boats glided leisurely past the windows.

The multi-million euro complex was opened in 2000 and has, like everywhere else in Bratislava, adapted swiftly to Covid-19.

Masks are mandatory and bottles of hand sanitiser are provided at the entrance.

“It was a big shock for us,” Maros Plitko, a spokesman of the Bratislava Tourist Board, told me as we perched on a bench among the outdoor exhibits.

“We weren’t an overcrowded destination to begin with, so for us every tourist was really important,” he said. “Now we have none it’s really a big problem.”

The drop in numbers has been precipitous. According to the Slovak Statistics Office, there were 18% fewer visitors to Bratislava – Slovak and foreign – in the first three months of 2020 compared with the same period in 2019. The figures for March alone were down by 71%.

Bratislava markets itself as “the 72-hour city” but the number of visitors staying here even for 24 hours has plummeted. Second quarter figures are not yet available, but are likely to make for grim reading.

Tourism might not account for much more than 6% of Slovakia’s GDP – the country is focused heavily on car manufacturing – and it makes up even less of Bratislava’s, but many livelihoods depend on it.

“Last summer was really busy for me. I remember working 27, 28 days per month,” said tour guide Petrik Rentka as we sat in the courtyard of Bratislava Castle.

He told me that many of his clients came from overseas, including the US, Malaysia and Singapore. But under Slovak and EU restrictions third-country visitors are still largely barred from entry.

A procession of enthusiasts in medieval garb passed through the castle gates – an annual re-enactment of the coronation of the king of Hungary, a state that once included what is now Slovakia.

From 1563 to 1830, the coronations were held here in Bratislava, known then as Pozsony, as much of Hungary was occupied by the Ottomans.

But there were no American, or Malaysian, or Singaporean tourists to witness it this year. Most voices were Slovak, with the odd phrase in Hungarian or German rising above the drums and the horses.

Petrik – and many like him – are waiting eagerly for the tourists to return.

“No job – no money,” he said. “But in Slovak we say that under the storm there is always the sun. I’ve got some money put away and I at least have had time to figure out what to do next.”

Check out! my all in one digital marketing suite Builderall is a complete digital marketing system check all the tools out for 1 dollar Click link below
This Super Simple keto soup helps melt the pounds . Try today!
26 trillion of debt .....time to buy gold Help your self today. Our national debt is 138% of GDP protect your wealth today rare metals are the only way Click the link to learn more
Ads by Smart Affiliate Ads