WASHINGTON (AP) — President Donald Trump has announced what he said are “significant actions” regarding U.S. relations with Hong Kong. But the measures are still just a warning, at least for now. He said he would direct his administration to begin eliminating the policies that give the semi-autonomous Chinese territory a distinct trade and legal relationship with the United States. But he didn’t say when. He also mentioned there would be a “few exceptions” but he didn’t take any questions at his announcement Friday. So, while tensions are high, the status quo seems to hold.

A look at where things stand:

WHAT EXACTLY DID TRUMP ANNOUNCE?

The president, in a brief Rose Garden appearance, announced a series of moves that included withdrawing U.S. financial support for the World Health Organization, in protest of its handling of the coronavirus outbreak, and the suspension of visas for some Chinese graduate students suspected of gathering research on behalf of their country’s military.

He said he would direct his administration to “begin the process of eliminating policy exemptions that give Hong Kong different and special treatment” in its relations with the U.S. Trump said this would “affect the full range of agreements” between the U.S. and Hong Kong. Trump specifically mentioned only the extradition treaty that dates to Hong Kong’s days as a British colony, and technology export controls and said there would be “few exceptions.” 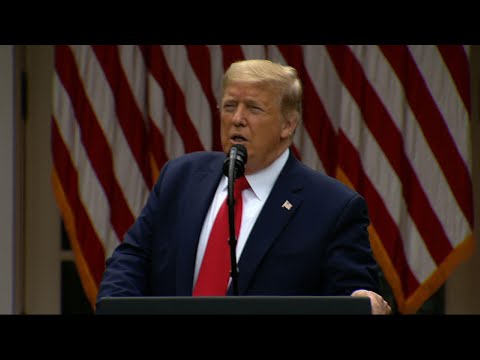 WHY IS THIS HAPPENING NOW?

Trump came into office with a hostile view of China and an oft-stated desire to overhaul U.S. trade policies that he believes have hurt the American economy. Some of that eased in January when he signed a trade deal with China. But the outbreak of the coronavirus in Wuhan province and Trump’s suspicion that the Chinese government hid the severity of the situation have added a degree of volatility to long-standing points of tension between the two countries over a number of issues, including human rights abuses and the status of Hong Kong.

U.S. officials and members of Congress have expressed increasing alarm about Hong Kong, and there have been widespread protests there over a series of moves by China to exert greater control over the territory. Under the terms of a China-Britain agreement, Hong Kong was to have enjoyed significant autonomy from the communist government in Beijing for 50 years, starting in 1997.

The Trump administration argues that agreement has been undermined by a new security law imposed by the Chinese government that eliminates some of the limited political freedoms people of Hong Kong had enjoyed. “Hong Kong is no longer sufficiently autonomous to warrant the special treatment that we have afforded the territory since the handover,” Trump said Friday.

WHAT ARE THE ECONOMIC STAKES IN HONG KONG?

Hong Kong is exempt from the tariffs applied to goods from the mainland, and the U.S. has a large trade surplus with the territory. Hundreds of American companies have offices there, and about 85,000 American citizens live in Hong Kong. Last year, Congress, where there is strong bipartisan support for penalizing China over human rights abuses, passed legislation directing the administration to impose penalties on Chinese officials involved in cracking down in Hong Kong.

It’s unclear. Secretary of State Mike Pompeo notified Congress this ;past week that the administration no longer regards Hong Kong as autonomous from mainland China. That set the stage for the U.S. to withdraw its preferential trade and financial status in consultation with Congress. But it’s likely to be a long process that serves to put China on notice that Hong Kong’s perks are in jeopardy.

Trump said he directed his administration to “begin” the process of eliminating the exemptions that benefit Hong Kong but he did not say when this would happen. Much will depend on those “few exceptions” that he referenced in his remarks Friday. He did say the administration would punish Chinese officials involved in the Hong Kong crackdown — something that Congress had already directed the administration to do — and that seems likely to be the next step.

Check out! my all in one digital marketing suite Builderall is a complete digital marketing system check all the tools out for 1 dollar Click link below
26 trillion of debt .....time to buy gold Help your self today. Our national debt is 138% of GDP protect your wealth today rare metals are the only way Click the link to learn more
This Super Simple keto soup helps melt the pounds . Try today!
Ads by Smart Affiliate Ads